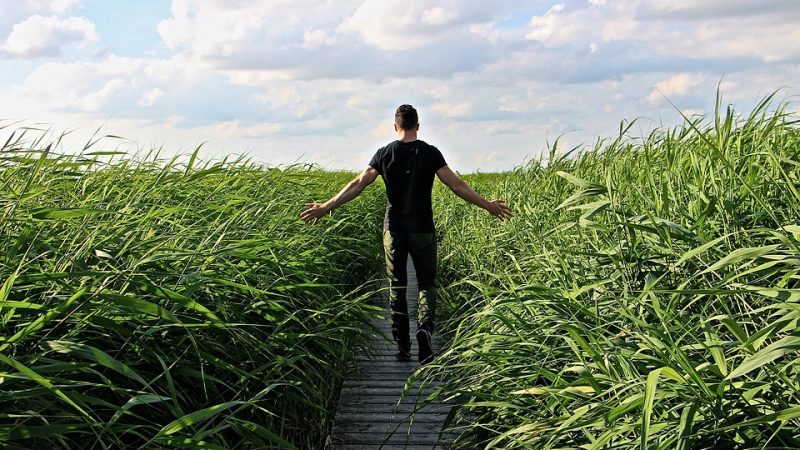 A thing holds meaning for us if it invokes an emotional response, be that an uplifting response or a troubling one.

Meaning for me is found in being a good husband, father and provider for my family.  In my faith too, bound up and shaped as it was by a difficult childhood.  I also find meaning in my spirituality, a very different and separate thing to my faith.

Not long ago I came across the idea of The Wounded Healer.  A wounded healer is a person who feels an empathetic response to the hurts they find in the world and a need to heal those hurts, a need strengthened by the wounds they carry themselves.  This holds true for me and being involved in the support and healing of others also holds a lot of meaning for me.

Not so long ago I stood on a bridge intending to kill myself.  I made two mistakes; I went there during daylight and I waited too long.  To understand that and what spirituality means to me, it helps to know something about my past and my illness.

My earliest clear memory is of my mother, on her knees hammering her fists on the floor. Her face is twisted with emotional pain, tears and snot running down it and she’s sobbing from the depth of her heart. Between her sobs she’s screaming “I wish you were dead.  I wish you were all dead!”  meaning us, her children.

I didn’t – couldn’t – understand at that age, but my mother suffered from manic depression.  When she was depressed, her hatred of us was expressed in so many abusive and neglectful ways.  My father was a violent man and would beat her and often us.  His cousin, my father’s drinking partner, was a sexual abuser and preyed on me and perhaps my siblings too.

As a small child, I was pushed out the door to attend Sunday School so as not to disturb my father.  Of course at that time I had a child’s understanding of Jesus, God and Heaven.  If you are good you would go to heaven and live forever.  When my mother screamed her wish for us to be dead I would pray to Jesus to take me to Heaven, but at 12 I knew what forever was, and although the experience faded, the idea of living forever still frightened me.

As I grew older and looked at the world, I questioned my faith and my view of it turned upside down. Eternal life had to be some kind of sick joke.  If there is a Hell, it’s being cursed with eternal life.  The whole universe seemed to be a sick joke.  I could see God had got it terribly wrong and my developing psychosis fed on that.

Violence at home escalated during my teen years.  My father was punching my brother full in the face now and outside of the home I became the target to a vicious gang of bullies. You might imagine I was scared during those times.  I sometimes was but more often, when I was being abused, beaten or threatened things became unreal.  I felt detached and my mind and my emotions fled.  This was disassociation, the mind’s way of protecting itself.  It is a protection but it comes at a price.  It comes unwanted at emotionally charged but benign times too.  Big parts of my wedding day and the births of my children were lost to it and I hate and curse it for that.

Along with that grew feelings that there is something very wrong with the world, that I’m not supposed to be in it and bad things happen because I am; that something terrible just below the skin of the world is hunting me.

However, at 19 I experienced my first high, an episode when things seemed exceptionally vivid, bright and clear.  I had levels of physical energy I hadn’t known before and on a cloudless day the brightness filled my senses.  I took a typical jog up a steep hill outside my home town and usually challenging, it became an easy sprint and I laughed as I ran.  Then the idea that I could make things better came into my mind.  I could pull God and all his Angels down from Heaven and make them fix the world.  I could do that.

Like my mother, I suffered deep depressive episodes too, but high or low my delusional mind pursued the same themes.  During one episode the universe had to end.  I would burn it and God would have to start over and perhaps this time he would get it right.  The flame was inside me and with anger and hatred of Him I was going to burn it all.

Another time I became preoccupied with the idea that the universe was created with a sound and if I could find it, record it, I could create a counter wave and undo creation.  I could hear it in starlight; frequency, amplitude, pitch, duration.  If only I could record it…

Between episodes, I continued to hate myself.  I’d manage for a lot of the time but despair would take me and send me tumbling when something impacted on my ability to cope, especially my ability to support my family.  My wife was an angel during those times and proof of a God who does care.

But hopelessness was always waiting.  I once heard that when we move away from hope, we move towards death.  From my personal experiences I can tell you how true that is.  When I’m ill there is no hope, and in the end, that’s all you really need to know to understand the importance of my spirituality to me.

I can’t tell you what spirituality is, I think it’s different for everybody.  I can only tell you what I’ve felt at times when I’ve needed healing.  In my experience you can’t find spirituality in a delusional mind that twists and breaks itself only to discover the only way it can come to terms with its past is to destroy itself and everything else with it.

During the highs there’s been a bright sense of something…  Once, I could see light shining through my hands as if I could see my own soul.  I had a feeling that some might call a spiritual or religious experience but it wasn’t.  It was a delusion.

It isn’t a delusion to say there’s a life in the world.  The world is alive in so many ways.  Sometimes it’s gentle, sometimes it’s fierce.  Quite deadly at times but always just as nurturing.  If you stop for a moment and allow it in, that life calls to you and your heart calls back.  It reaches into you and gives you an understanding of your place in that life and the things that really matter.

I stood on a bridge intending to kill myself.  The bridge was high and crossing a valley; the view was beautiful.  By the time I reached that spot I’d slipped into that distant place again and time passed without awareness.  I didn’t want to cause distress to others who might see me fall so I waited for traffic to clear and people to pass by.  That didn’t happen quickly and after a while, the feeling of detachment faded.  As it did I started to notice the life around me.  Slowly it crept into me and as it did I felt my place in that life.  It was simply to be part of life and live.   The things that brought me to the bridge didn’t matter.  There was life everywhere and I was, in a very simple and quiet way, part of it.

It isn’t an illusion or delusion, it’s just a heartfelt response to life.  I stand at my gate for a moment each day now as I leave for work and let that life come into me.  I can call on it anytime I need to.  It’s not a cure-all or a final answer, but it is soothing, nurturing and healing.

Somebody saw me on the bridge that day and called the police.  I riled at the policeman who came to talk to me, then slid to the ground weeping and slipped back into that numb, distant place.  I lost that feeling of life as despair took me again.  I was admitted to psychiatric hospital.

My room there had a deep windowsill that I could sit along and that’s what I did.  Day and night I looked out of the window.  I sat there with my face pressed against the glass lost in the life outside.  Life was out there but we could still reach one another.  Nothing else mattered as I sat there for two or three days.

I recently had the opportunity to speak to a nurse who was on the ward at that time and indeed their main memory of me was me sitting on the windowsill.  I wasn’t catatonic, I was responsive, but I was preoccupied, wrapped up in that nurturing connection to life.  I was healing.  The nurse told me I’d actually sat there for six days.

At the end of my time on the windowsill I was hopeful.  The worst was over.

I’ve been relatively well for a few years now.  The ‘wounded healer’ in me has led me to volunteer in a lot of settings and the meaning and connectedness I gain from that plays a big part in sustaining my wellbeing. A big part of staying well is also knowing when to take time out to let that life in.

This website uses cookies to improve your experience while you navigate through the website. To adjust your cookie category settings via the keyboard, press 'space' on the focused category. The cookies that are categorized as necessary are stored on your browser as they are essential for the working of basic functionalities of the website. We also use third-party cookies that help us analyze and understand how you use this website. These cookies will be stored in your browser only with your consent. You also have the option to opt-out of these cookies. But opting out of some of these cookies may affect your browsing experience.
Necessary Always Enabled
Necessary cookies are absolutely essential for the website to function properly. These cookies ensure basic functionalities and security features of the website, anonymously.
Functional
Functional cookies help to perform certain functionalities like sharing the content of the website on social media platforms, collect feedbacks, and other third-party features.
Performance
Performance cookies are used to understand and analyze the key performance indexes of the website which helps in delivering a better user experience for the visitors.
Analytics
Analytical cookies are used to understand how visitors interact with the website. These cookies help provide information on metrics the number of visitors, bounce rate, traffic source, etc.
Advertisement
Advertisement cookies are used to provide visitors with relevant ads and marketing campaigns. These cookies track visitors across websites and collect information to provide customized ads.
Others
Other uncategorized cookies are those that are being analyzed and have not been classified into a category as yet.
SAVE & ACCEPT
Powered by